Gulenists were major donors to Obama's 2012 campaign -
What will they ask in return?

Gulenist donors made significant contributions to both of Obama's presidential campaigns, particularly the 2012 one.  Burak Yeneroglu ranked number 96 on a list of Obama’s top fund-raisers, having bundled $652,900 for 2011-12 (source: New York Times, Sep 13, 2012).  This amount does not include his own personal contributions, and furthermore may be an underestimate.

The Table below shows Gulenist donors who made single contributions of $35,800 each to the Obama 2012 campaign.  Some of these individuals may have made additional contributions.  The amount of $35,800 was reported in a Sep 30, 2011 New York Times article to be the per-plate price for dinner with Obama, that is, a chance to meet him in person.  The source for the contribution amount, zip code, date and employer name was the campaignmoney.com website.


Table 1.  GulenMovement-affiliated individuals who made contributions in the amount of $35,800 to the Obama campaign.  Some made additional contributions.

"Which he did thrice refuse"

The campaignmoney.com website also shows a series of three $35,800 contributions to the 2012 Obama campiagn from Mahmut Topal, all three of which were apparently returned.  Topal lists his employer as Calik USA, a company known to be affiliated with the Gulen Movement (in his 2009 thesis from the University of California, Santa Cruz, sociologist and researcher Joshua Hendrick noted that “The GM [Gulen Movement] is also intimately linked with Turkey's recently famous multi-billion dollar family holding company, The Calik Group...").

The contributions from Topal are as follows.  In all cases he is listed as an Executive with Calik USA Inc.

The reasons why the Obama campaign returned these donations, and why this happened three times, are unknown.  Since $35,800 was the price of dinner with Obama, it is also unknown whether Topal in fact had dinner with Obama (perhaps even three times?) before the contributions were returned.  It would not, of course, have been possible to "return" the benefit of Topal's access to the President, had this in fact occurred.

Ranking 96th might normally not seem noteworthy, but among fundraisers in a presidential campaign it guarantees status as a very important person in the eyes of the president and his staff.

Burak Yeneroglu, who ranked 96th among Obama's fundraisers in the 2011-12 cycle, bringing Obama at least $652,900 in bundled donations, is an executive with Bayrock Natural Stone, a corporation located in Carlstadt, New Jersey.  When he made a campaign donation to Hillary Clinton's PAC in Nov 2008, Yeneroglu listed his employer as Bayrock Group LLC, which appears to be a parent corporation of Bayrock Natural Stone.

Evidence of the affiliation of Bayrock Natural Stone with the Gulen Movement is provided not only by the fact that Yeneroglu operates in Gulenist circles such as the Turkic American Alliance, but also from Bayrock's sponsorship of various Gulenist events, and its appearance in the portfolio of Lotus Media Productions, a Gulenist corporation whose clients have all been Gulen businesses, organizations, private Gulen schools, or Gulen charter schools (it is well-known that all Gulenist entities try whenever possible to keep their business custom within the Gulen network).

Bayrock Group LLC has been associated with an individual named Tevfik Arif, who was arrested in 2010 Turkey "as a suspected organizer of an international ring of high-price prostitutes" (Bloomberg, October 1, 2010).  The Bloomberg article states that Tevfik Arif "was cited as the chairman of New York-based property group Bayrock Group LLC in a September 2007 press release by real-estate mogul Donald Trump’s Trump Organization to publicize the group’s SoHo Hotel Condominium in New York, in which Bayrock was a partner along with Trump and the Sapir Organization."  The Bloomberg article proceeds to mention a business partnership, in the form of a joint ownership of a hotel, between Tevfik Arif and Fettah Tamince.  Tamince, owner of the Rixos hotel chain in Turkey, is known to be affiliated with the Gulen Movement.  In an interview with a Hurriyet correspondent, Tamince said Gulen was his "idol" and he visits him often in America ("Fethullah Hoca benim için bir değerdir, bir idoldür; sık sık Amerika’ya gidip ziyaret ediyorum" - Hurriyet, May 26, 2004; a partial English translation also on the Hurriyet website identifies Tamince as a "Fethullah follower").  Arif was arrested in a raid on the historic "Savarona" yacht along with "Russian, Kyrgyz and Kazakh businessmen and high-level government officials," according to Bloomberg.  Arif was later acquitted of all charges, but this must be considered in conjunction with the widespread belief that the Gulen Movement has infiltrated the Turkish judicial system (v. journalist Ahmet Sik's book).

This was not the first controversy in which the name of Bayrock Group LLC arose.  In September 2009, Courthouse News Service reported that "the former finance director of a New York-based real estate developer claims subsidiaries of the Bayrock Group embezzled millions of dollars, defrauded the Internal Revenue Service and extorted money through threats of torture and death."  Bayrock Group LLC and Tevfik Arif were named as defendants in the associated federal case Kriss et al. vs. Bayrock Group LLC et al. which is ongoing as of this writing.

In brief, Burak Yeneroglu's Bayrock Group LLC has quite a singular history. 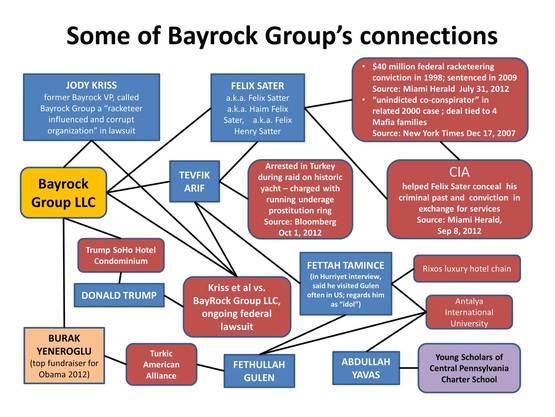 Might these substantial Gulenist campaign contributions affect the Obama administration's decisions about the nation's largest chain of charter schools?

Giving these massive Gulen Movement-associated campaign donations, will Obama or his staff be able to objectively consider the many concerns about abuses in the nationwide chain of Gulen charter schools?  Charter schools are now receiving substantial grants from the federal government; for example, on Dec 28, 2012, an award letter was sent to Harmony Public Schools, a large chain of Gulen charter schools in Texas, informing them that they were to receive a Race to the Top grant in the amount of $29,866,398.00.  This award is surprising in view of a front-page over-the-fold story in the New York Times in 2011 detailing related-party deals (some in the millions) in the Harmony school network, and also given the general controversy over Harmony's affiliation - and continued public denial of its affiliation - with the Gulen Movement.

We sincerely hope that President Obama and his staff will see past campaign contributions, and make decisions based on the overall good of our nation.