The terms "philanthropy" and "self-sacrifice" are often used in writings on Gulen schools, particularly those produced by Gulenist supporters or sympathizers.

A March 14, 2008 article in Today's Zaman, the flagship newspaper of the Gulen Movement, quoted Sister Anne Munley, president of Pennsylvania's Marywood University, as follows: "'Turkish people establish schools all across the world and show great self-sacrifice in educating people of all races and religions. The Gulen movement considerably contributes to the establishment of these schools,' noted Munley."  The article goes on to quote Thomas Michel (who has attended many Gulen conferences) as saying about the Gulen Movement: "It has reached millions of children all across the world and helped with their education regardless of their races, languages, religions and nationalities. This is a great self-sacrifice and success."

A BBC article of May 24, 2011 entitled What is Islam's Gulen movement? stated that "The combination of philanthropy and business has been powerful, he says, with Gulen-inspired schools supporting and smoothing the way for Turkish businessmen in emerging markets like Africa and Central Asia."

An examination of tuition costs at Gulen schools (see below) compared to the per capita income of the countries they are located in, suggests that these schools are far more about business than "philanthropy."  Indeed, this was confirmed in a recent post made by Zaman columnist Mustafa Akyol on Twitter in response to questioning regarding a 49-year contract for educational services Turkey signed with Somalia.   Akyol stated "It is only rational for any business to ask for a foreseeable stability for their investment."

Bilal Wahab of George Mason University gives the following strange rationalization for why Gulen schools provide "hope" in Iraq, a country with an annual per capita income of only $3800, despite charging steep fees:  "One of the examples of hope in Iraq is the social entrepreneurship; a school that was sponsored by Hizmet (a.k.a the Gulen Movement) in 1994.  It was a free high school at first but it has built a reputation for itself, graduated smart students and after that it started charging people for money.  They say, 'We can educate your kids. We can teach them English, Turkish, math and science.  And these students can participate International Scientific Olympics and they come back with prizes.  So they’ve become marketable.  Once they become marketable people pay a lot of money to go to that school.  But that money is being used to build another school in another town.  So, this process of mushrooming without being dependent on anyone has created a positive effect on other Civil Society Organizations."  (It is parenthetically noted that George Mason University has produced a number of Gulen apologists, and, interestingly, was also the recipient in 2009 of a $4 million donation from a Turkish businessman.)

The system Wahab mentions, of initially providing education for free or at low rates and then raising charges substantially, may perhaps explain the 2008 New York Times article on Gulen schools in Pakistan, which subtly suggested that the PakTurk schools were accessible to poor Pakistanis by introducing them with the following lines: "The poorest Pakistanis cannot afford to send their children to public schools, which are free but require fees for books and uniforms." "The Turkish school is in a poor neighborhood in the south of the city..."  "Still, his [Gulen's] schools are richly supported by Turkish businessmen."  The fact is, at present, the PakTurk schools that were the subject of this article also require fees for books and uniforms, on top of the already considerable tuition and registration fees (see below).

Gulenists appear to have convinced quite a few journalists, authors and researchers that Turkish businessmen are "supporting" the Gulen schools.  However, providing the initial capital for a business that then goes on to generate substantial revenue should not be viewed as "support" in a charitable sense.  It is called "investment," the very word that Akyol himself used.  It appears that once again, the Gulenist twin tactics of strategic ambiguity and secretive collusion may be at play to hide self-interested motives behind a facade depicting selfless "service to mankind." 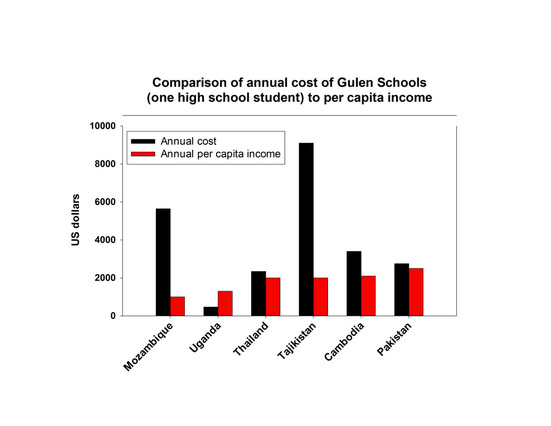 Zaman International School, Cambodia
Cost per year:  $350 (registration fee) + $500 (enrollment fee) + $2550 (tuition) = US $3400
Source: school website (accessed Aug 2011)
Cambodia per capita income: $2100
Cost as percent of per capita income: 162%
The above costs (except when noted) were for high school students, and did not include the price of the compulsory uniforms, which must be purchased from the school.  In addition, in some Gulen schools, extracurricular activities such as tutoring, excursions or even camps are obligatory for some or all students, and there are associated fees.

Some students get scholarships which offer discounts on tuition, but it is highly questionable whether even that should be regarded as "philanthropy."  The scholarships are given only to the highest-performing students among those whose parents cannot afford the cost.  These students pay the school in another currency - they win awards, helping establish the schools' reputation, so that the parents who can pay the hefty fees are attracted to the school.  After graduation, a select group of these students are recruited to go forth and teach in other Gulen schools.  As the Gulen Movement made their education possible, they feel an obligation to repay with service to the Movement (cf. Aydin Ozipek's 2009 thesis, Central European University).

The source for per capita income (i.e., GDP per capita) was the CIA World Factbook, accessed Sep 2011.

Some math regarding the "water for the mill"

Helen Rose Ebaugh has argued that the funding for the Gulen Movement's projects comes from donations from its members.  In her book "The Gulen movement: a sociological analysis of a civic movement rooted in moderate Islam," she states that "many very wealthy businessmen contribute 10-50% of their yearly income to the movement projects..."  (Recall that as evidenced from Stephanie Saul's June 2011 New York Times article, some of these businessmen are also deriving part of their wealth from the Gulen schools.)

In an article entitled "Funding Gulen-Inspired Good Works: Demonstrating and Generating Commitment to the Movement" from Oct 2007, Helen Rose Ebaugh and Dogan Koc wrote that "Based on the scant literature that exists on the funding of Gulen-inspired projects and our own interviews conducted with members of the Gulen Movement both in Turkey and in Houston, Texas, it is evident that the money behind the movement is provided by millions of people the world over who are committed to the ideas and ideals promoted by Gulen."

On the other hand, consider that if there are 1500 Gulen schools worldwide (as the website of the Fountain International School in the Philippines asserts), and each school has, say, 500 students, and the typical profit from the tuition of each of these students is $1000 (likely an underestimate, in view of the fees listed above) then the total worldwide annual profit would be