Who is Fethullah Gulen and
what is the Gulen Movement?

Fethullah Gulen is the most powerful religious leader in Turkey today, even though he lives in Pennsylvania.

Since the 1970s, Gulen and his followers have slowly built up a network of educational institutions, non-governmental organizations and businesses that started in Turkey, spread to Central Asia, and now is entrenched in every continent but Antarctica.  This network is called the Gulen Movement.  It is extremely secretive, and many of its members (the "Gulenists") and organizations will not even openly admit their affiliation.  Publicly, the Gulen Movement advertises itself as a grassroots volunteer civil society movement that is interested only in humanitarian and educational works.  Its members like to stress that it is loosely organized with no central coordination.  Outside observers have noted, however, that it is in fact hierarchical and authoritarian, and has political, religious and economic goals.  Psychological pressure tactics appear to be used in recruiting young people as members (such tactics are described in these statements of ex-members, in Dutch, on the website of NOVA, a TV news program in the Netherlands.  An English translation can be found here.)

In the 1970s, Gulen's summer camps, tutoring centers and schools openly taught Islam.  However, in response to repression under Turkey's secular regime, the educational institutions shifted to curricula that did not overtly include any Islamic teachings.  Outside of Turkey, the network of Gulen schools has been rapidly expanding all over the world, and around 1999 the Gulenists began to establish publicly-funded charter schools in the United States, where they already had a small number of private schools.  Some Gulen schools appear on the surface to be completely secular, yet observers have found that they covertly engage in missionary activities either after hours in school dormitories, or during other extracurricular activities.  In some countries the Gulen schools openly teach and promote religion, and in South Africa a very large school-mosque complex is under development.

Gulen is extremely controversial in Turkey.  He has many devoted followers.  At the same time, many Turks completely mistrust him, and in fact see him as ruining their country.  A number of sharply critical books have been published in Turkish, such as Merdan Yanardag's "How was Turkey besieged: behind the curtains of the Fethullah Gulen Movement."  Secularists, who controlled Turkey until recently, mainly through the army, suspect Gulen of a secret Islamist agenda within Turkey.  These suspicions led to Gulen leaving Turkey in 1999 to avoid being charged with trying to promote an Islamic state.

Other Turkish books critical of Gulen's influence on Turkey and its politics include several by Hikmet Cetinkaya, a columnist for the major national newspaper Cumhuriyet.  The late University of Ankara history professor Necip Hablemitoglu, another highly vocal critic of the Gulen Movement, authored "Kostebek" ("The Mole"), detailing the Gulen Movement's infiltration of the Turkish police.  Hablemitoglu was assassinated in 2002 and the case has never been resolved; his book was published posthumously.

In September 2010, a respected former police chief named Hanefi Avci wrote a best-selling book about how the Gulen Movement has infiltrated Turkish institutions and stealthily taken over the state.  Not long after this book appeared, Avci was arrested.  It is widely believed that the charges against him are false, and that the underlying reason for the arrest was retaliation for this book.  While opposition to Gulen's influence is often claimed to be confined to Turkey's staunchly secular community, concerns appear to be spreading even among people who do not particularly identify with the secularists, and Avci's arrest in particular, because of his reputation for integrity, seems to have created a great unease.  The arrests on March 3, 2011 of prominent journalists Ahmet Sik and Nedim Sener, both of whom had written books about the Gulen Movement's influence on the state, gave rise to international criticism and further deepened suspicions that the Turkish police and judiciary were retaliating against individuals only because they had criticized the Movement.  Justin Vela's Jan 11, 2012 article in Foreign Policy entitled "Behind Bars in the Deep State" gives an excellent exposition of this, and along with his Dec 29, 2011 eurasianet piece entitled "Has Gulen Movement Replaced Deep State?" are highly recommended reading for anyone seeking to understand the Gulen Movement's present role in Turkey and the anxiety it inspires in many.

The political situation has changed substantially in Turkey since Gulen relocated to the U.S. in 1999; control of the country has slipped from the military (often referred to as the "secularist" establishment) to the AKP/Gulen Movement nexus.  (The AKP, a.k.a. Justice and Development Party, is the political party in control of Turkey since 2002, headed by Prime Minister Recep Tayyip Erdogan.)   While they may ultimately be rivals for control of the country, at present it is not clear that either the Gulen Movement or the AKP can control Turkey without the other's support.   A series of arrests of high-level military officials in early 2010, along with the successful vote on the constitutional referendum in September 2010, are evidence that the AKP/Gulen alliance has firmly solidified its control of Turkey.  Further arrests and resignations in 2011 and 2012 confirmed this beyond any doubt.

Despite this fact, and despite Gulen's acquittal of all charges back in 2006, Gulen remains in Pennsylvania, where he appears to lead an extremely reclusive life.  In 2008, the Department of Homeland Security tried to deny Gulen a green card, but a number of his American supporters, including former Rand Corporation and CIA official Graham Fuller, wrote letters on his behalf, and Gulen prevailed.

Gulen and his schools have been controversial not only in Turkey, but also in Central Asia, Europe, and now the United States as well.

A good introduction to the Gulen Movement can be found in an article by Tim Steller of the Arizona Daily Star, April 25, 2010: "Gulen movement an enigmatic mix of Turkish nationalism, religion, education."  Steller offers some additional information on the Gulen movement in an article on a chain of Gulen schools that appeared in the same edition of this Arizona newspaper.

Another excellent source of information on the business/economic and political activities of the Gulen Movement is the 2009 PhD thesis of Joshua David Hendrick, University of California, Santa Cruz.  Aydin Ozipek's 2009 thesis from Central European University, freely available for download at this link, is also worthwhile reading, particularly for its explanation of the economic factors leading individuals to join the Gulen Movement.

Organizational chart for Gulen Movement in the United States (Feb 2012): 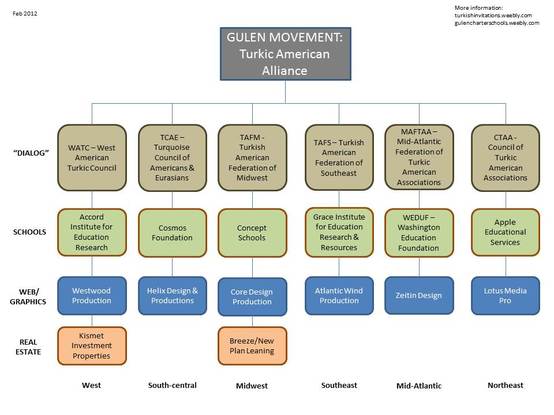