ISWEEEP (International Sustainable World: Energy, Engineering & Environment) is a science project competition, i.e., science fair, run by the Cosmos Foundation, a Gulenist corporation with non-profit status that is also the charter holder of the Harmony chain of Gulen charter schools in Texas.  The Cosmos Foundation additionally has a number of management/consulting financial arrangements with Gulen charter schools in other states, including Oklahoma, Arkansas, and Louisiana.

ISWEEEP takes place in Houston annually in spring, and the first event was in 2008.  For the first three years, ISWEEEP accepted projects from both middle and high school students.  In 2011, ISWEEEP split into two separate competitions, one still called "ISWEEEP," for high school students, including international ones, and one called ISWEEEP 3E, apparently only for middle school students in the US.  Evidence of bias in the middle school competition is discussed on this page.

In 2011, according to various Gulenist websites, the competition had 2222 projects register, out of which 440 projects were selected as finalists, that is, as projects that were displayed at the Houston event and were eligible for awards.  The method of selection of finalist projects is not explained on the ISWEEEP website.

ISWEEEP appears to be attempting to compete with the ISEF competition, which began in 1950 and is quite prestigious.  ISEF is the premier science fair in the US, attracting participants from all states and many countries around the world.  ISEF "organizers say it’s the world’s largest science fair of its kind," and this claim appears credible in view of the fact that ISEF had 1539 finalist projects accepted to attend the fair in Los Angeles in May 2011.  Strangely, ISWEEEP, which had 440 finalist projects in 2011, also has taken to billing itself as "the largest science fair of its kind in the world," as can be seen, for example, in this document from a regional science fair in Texas where ISWEEEP's claims were apparently reprinted without question.

As with other Gulen competitions, such as INESPO in the Netherlands and the GENIUS competition in Oswego, New York, ISWEEEP appears to have a strong bias towards projects from Gulen schools, as shown by the following chart. 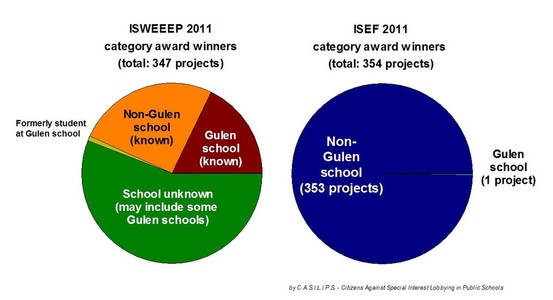 Note that ISEF is not associated with the Gulen Movement.

Both ISWEEEP and ISEF give two types of awards: category awards and sponsored/special awards.  The bulk of the awards are category awards, and the above figure is for these.

One of the great peculiarities of ISWEEEP is that while they list project titles, names of students, and country of origin, the names of the students' schools are not shown.  This is highly unconventional, as all other science fairs including ISEF show the school names.  It is only natural to do so, as winning projects bring prestige to a school, and the public naturally is interested in this information.  The omission of school names is almost certainly due to the desire of the Gulen Movement to disguise the fact that a large fraction of the winning projects come from Gulen schools.  Because of this omission, it has not yet been possible to identity the associated school for every ISWEEEP project.  Nevertheless, of 347 winning projects, it was possible so far to determine that 62 came from Gulen schools (see this page for the list), including charter and private schools in the United States as well as Gulen schools from other countries.  It was also possible to identify 88 projects as being from schools known to not be affiliated with Gulen.  Three projects were from students who had formerly attended Gulen schools.

In stark contrast, of 354 winning projects at ISEF, only one came from a Gulen school (Sonoran Science Academy, a Gulen charter school in Arizona). 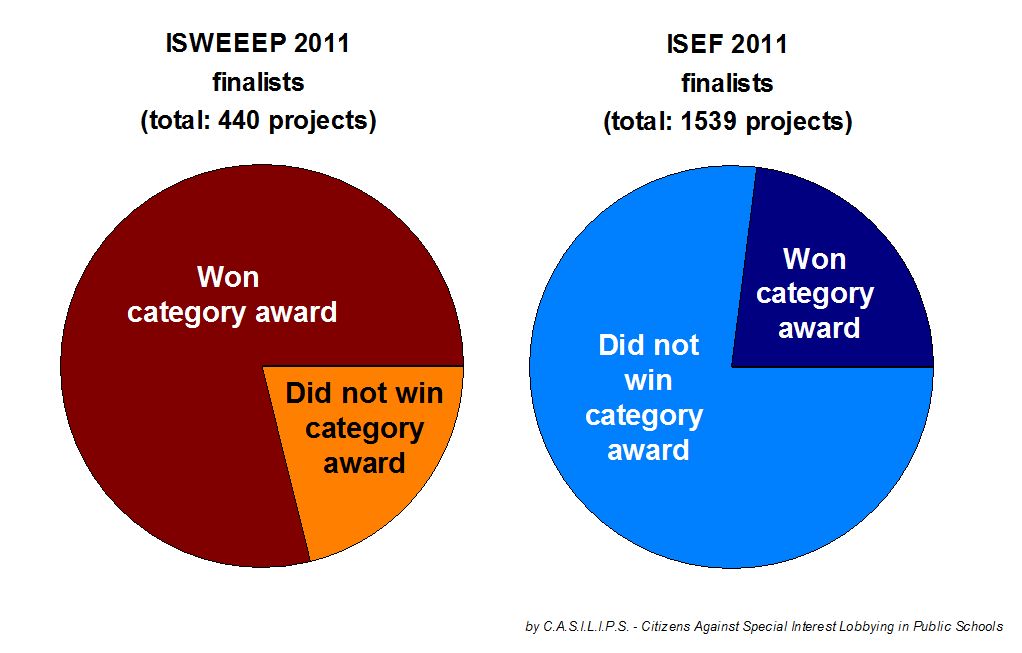 This chart makes it clear that the major selection process determining who gets awards at ISWEEEP is the selection of the finalists, not the judging process that takes place at the fair itself.  A certain number of finalist slots are determined at various regional science fairs around the country with which ISWEEEP apparently has some arrangement.  However, this does not appear to be the main route by which projects from Gulen schools reach ISWEEEP.  It also does not explain how international projects, many of which are from Gulen schools, are chosen.

It is also insightful to read the account of a student from Zaman International School, a Gulen school in Cambodia.  Here is an excerpt (boldface added):
"I produced the bio-diesel many times to improve my method. I wrote down all the processes used to produce bio-diesel and made a report which was submitted in my abstract to I-SWEEEP. A week later, a teacher told me that my project was accepted, thus I needed to continue with my research papers. But there were problems; the bio-diesel that I produced was still not a bio-diesel, so I continued working with it. However, I still had many things to do; I needed to solve the problems while I was making my bio-diesel. I had to write down all data including experiments and experiences and do many tests to show that my bio-diesel was a real bio-diesel. Finally, when I was happy with my conclusions, I sent the completed paper to the I-SWEEEP committee. The project title was 'A Kind Of Hollyhock (Jatropha) Invention to Bio-diesel: What's Work?'  I finished all of my work one week before I went to Houston, Texas, USA."

Even allowing for the fact that English is not this student's native language, there are irregularities in this account that should raise eyebrows.  It sounds as though most of the data collection, the research paper, and the conclusions were produced after the project was accepted.  That and the statement that the project was completed only one week before attending ISWEEEP are not in line with the norm for high-level competitions such as, for example, ISEF.  A document on the ISWEEEP website describes the process for registering to attend ISWEEEP: "We also require research paper submission is required [sic] for individual applicants. Students who selected through science fair organizations do NOT need to submit research paper. Research paper will be used only by Pre-Elimination Committee to decide on the qualification to I-SWEEEP."  Perhaps this student bypassed the requirement of submitting a research paper at the time of application because she was selected through the "Zaman International School Science Fair," which is indeed listed as a "partner organization" on the ISWEEEP website.  But why does the student make no mention whatsoever of participating in her school's science fair?

A news article from the Fridley Patch in Minnesota, dated May 10, 2011, also contains disturbing information regarding how ISWEEEP operates.  The article, about three students from a private religious school who won a bronze medal at ISWEEEP 2011, states that "Their project, called 'Light Efficiencies: A Key to Saving the World,' caught the judges’ attention because it tied in religion, in addition to the environment, as a purpose and motivation to continue with the project."  (Boldface was added.)  It is deeply concerning that religion enters into the ISWEEEP judging process.  This appears to represent a major step backwards for science education in the USA.  It might further be asked whether ideology also played a role in the selection of this project as a finalist; it won a bronze medal at the Minnesota state science fair.  Why were numerous projects that won gold or silver medals bypassed in selecting this particular one to advance to what is claimed to be the "international" level?

The investment of organizing ISWEEEP including the cost of rewarding students from non-Gulen schools (necessary to maintain the illusion of credibility) pays off handsomely for the Gulen Movement, by playing a major role in building the reputation of its international network of Gulen schools.  This reputation translates directly into income, as parents become willing to pay steep tuition fees to have their children attend Gulen schools.  Academics buy into this reputation as well; in her book on the Movement, Helen Rose Ebaugh wrote that "the extraordinary number of students from Gulen schools who win top prizes in the Turkish as well as national academic Olympiads is testimony to the excellence of the education provided in these schools."  Websites of Gulen schools around the world advertise the medals won at ISWEEEP by their students; a typical example is that of Sarajevo College, a Gulen school in Bosnia, which has a page on the 2011 competition entitled "Competing with the World for Bosnia and Herzegovina."  The awards have led to local leaders and dignitaries visiting and praising Gulen schools.

ISWEEEP has so far been taken at face value by a number of regional science fair organizations around the U.S. which refer students to ISWEEEP, sometimes through a partnership agreement.  An example is the Vermont State Science and Math Fair, which states on its website: "2011 is the fourth year of I-SWEEEP at the VSSMF.  The Board of Directors of the VSSMF nominated five representatives from the senior section (high school) on the basis of abstracts; which were due a week earlier than for the VSSMF.  From these nominees, I-SWEEEP selected two representatives who will compete in I-SWEEEP 2011 in Houston, Texas, on May 4th-9th.  VSSMF will provide a stipend of $300 to each representative and his/her teacher for both of Vermont's I-SWEEEP representatives, to defray travel costs to Houston.  I-SWEEEP provides all meals, lodging, and domestic transportation within Houston."

The website of the Twin Cities Regional Science Fairs (accessed Oct 2011) advertises ISWEEEP, and states that "Those who attended ISWEEEP in 2009, 2010 & 2011 from TCRSF gave it rave reviews!"

These and other similar organizations might wish to determine whether ISWEEEP has adequate standards of transparency and policies to avoid conflicts of interest in project selection and judging before continuing to promote ISWEEEP.

Why everyone should be concerned about bias in science fairs

Science fairs are not merely hobby events.  An award from an international science competition can be a key asset on a college application.  It is quite possible that awards from ISWEEEP have played a role in the admission of some students to universities.  Furthermore, the special awards at ISWEEEP 2011 included several scholarships from the University of Texas at Austin, as well as medals or certificates from the Army, Air Force, and the Office of Naval Research.  The university admissions process is highly competitive, and any applicant having an unfair advantage, such as an award that they received for some reason other than their own accomplishments, is potentially taking away an opportunity from other more qualified applicants.

Bias in a science competition disrespects the creativity and hard work of the many talented students who truly deserve awards.


Further analyses of the ISWEEEP competition will be added to this website in the near future.  Note to any interested journalists: supporting documentation showing the connection of projects to Gulen schools has been collected and saved.