The Gulenist background of
a propagandist doctoral thesis

The University of Nevada-Reno is Nevada’s top university, a quite respectable institution, with many talented, dedicated faculty members and students and a record of meritorious publications.  In 2010, Newsweek ranked several of its graduate programs in the top 100 nationwide.  Its website notes that its Master of Business Administration degree program is ranked in the top 25 nationally by BusinessWeek magazine; faculty include nationally known experts in Earth Sciences; and its journalism school boasts six Pulitzer Prize winning graduates.

It is therefore shocking that UNR somehow accepted Hasan Aydin’s 2011 PhD thesis entitled “The Educational Effectiveness of Gulen-inspired Schools: The Case of Nigeria” in Curriculum, Teaching, and Learning.

Aydin’s thesis can be obtained through ProQuest, a service available through a number of public libraries around the country.  The abstract can be read online.

The thesis reads like a 271-page-long Today’s Zaman article.  (For those unfamiliar with it, Today’s Zaman is a Turkish newspaper and the main propaganda vehicle of the Gulen Movement.)  It makes no contribution besides the attempted glorification of Fethullah Gulen, the Gulen Movement, Gulen schools, and Gulenist teachers.  This is the same Fethullah Gulen described in a March 12, 2012 article in the New Yorker as "reviled and feared by much of Turkey’s population."

Aydin’s thesis contains a blatant misquote of President Bill Clinton, distorted to make it falsely appear as if  Clinton praised Gulen’s educational efforts at the 3rd Annual Friendship Dinner of the Turkish Cultural Center of New York.  The following image is taken directly from Aydin's thesis: 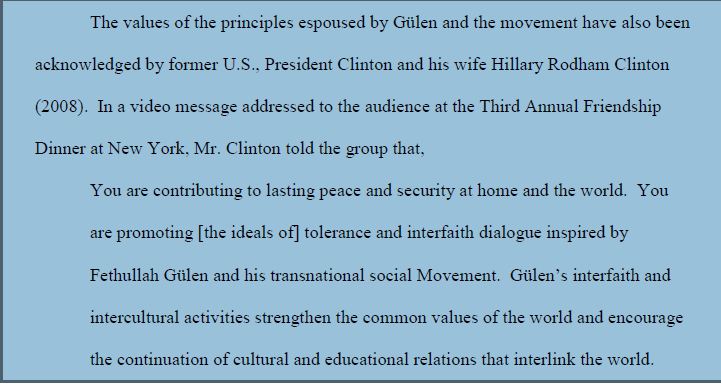 The last sentence that Aydin quotes is a complete fabrication.  Clinton did not say it in his address.

The video of Clinton's speech can be viewed online.  Here are his actual words (the complete text can be read on this page):  "By being here tonight, you are contributing to lasting peace and security at home and abroad. You’re contributing to the promotion of the ideals of tolerance and interfaith dialog, inspired by Fethullah Gulen, and his transnational social movement.  You do it through your everyday lives, and you are truly strengthening the fabric of our common humanity, as well as promoting the ongoing cultural and educational ties that bind our world together. "

It appears that Aydin, rather than going to the original source for his quote, instead used a Today's Zaman article of Sep 27, 2008, which stated:  "Former US President Clinton and his wife Hillary Rodham Clinton praised the contributions of Fethullah Gulen -- a prominent Turkish intellectual -- to inter-religious dialogue in a video message they sent to the event.  'By being here tonight you are contributing to lasting security at home and the world. You are promoting [the idea of] tolerance and interfaith dialogue inspired by Gulen and his transnational social movement,' he said.  He also said Gulen's interfaith and intercultural dialogue activities strengthen the common values of the world and encourage the continuation of cultural and educational relations that interlink the world."

That last sentence is the same distortion as in Aydin's thesis.  Clinton was praising the activities of the Turkish-American community that he addressed at the dinner, not those of Gulen himself.

Moreover, here is how Aydin cites Clinton's speech in his bibliography:

This is exceedingly disingenuous as it suggests that Bill Clinton himself created a video and entitled it "Fethullah Gulen's Contribution to the World."  In fact it was the Turkish Cultural Center of New York that uploaded the video to youtube and gave it this wildly misleading title.  Aydin's misquote and inaccurate citation create an illusion that Clinton enthusiastically praised Gulen when in fact his speech only referenced Gulen obliquely.

Aydin admits to bias and having preconceived ideas

Aydin's thesis contain two admissions; first, that he was affiliated with Gulen schools, and second, that he came to his research with preconceived ideas about his conclusions:

Aydin did indeed have "connections."

Apart from the fact that Aydin's bias create serious concerns about his suitability to produce an objective, scholarly work on Gulen schools, his thesis has serious flaws in its methodology:


So how did this thesis come about?

All the above raises the question of how Aydin's thesis ever came into being at an institution with the reputation of the University of Nevada-Reno.  The answer appears to lie chiefly in one individual who, while not officially Aydin's advisor, was on his committee: Murat Yuksel.

Yuksel's field is not education.  He is in the computer science and engineering department.  Yet a passage in Aydin's thesis acknowledgements shows that Yuksel played a very important, perhaps even seminal role, in his PhD thesis:

Murat Yuksel is on the board of Coral Academy of Science Reno, a Gulen charter school.  He has many other Gulenist connections, as shown in the following diagram: 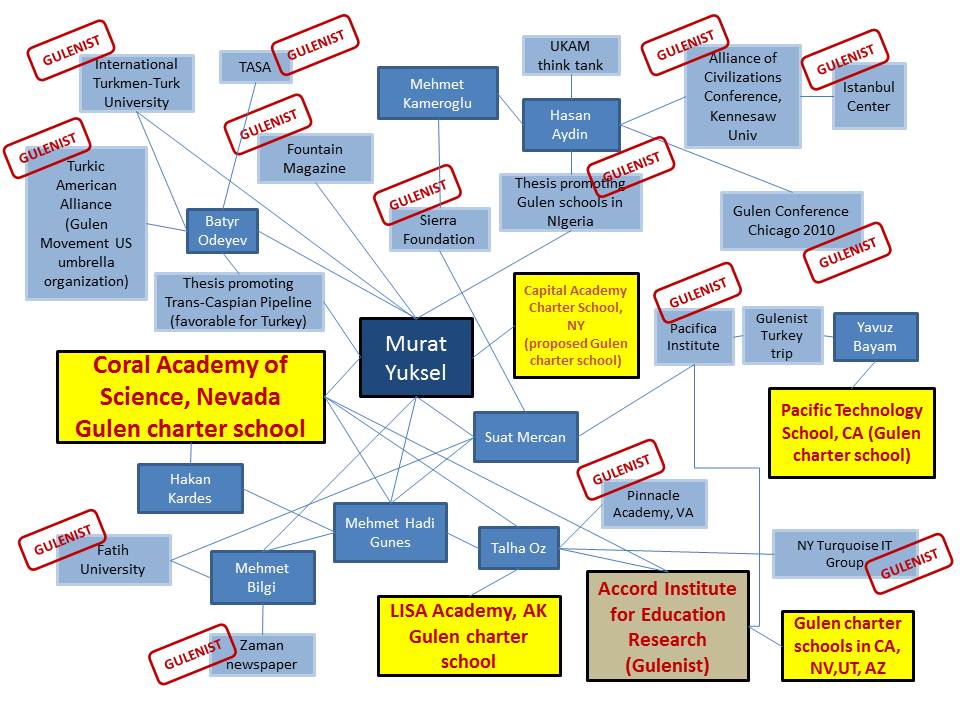 Download File
Given his affiliations with the Gulen Movement, Yuksel clearly had a vested interest in promoting Gulen schools.  This is not merely an "educational" interest.  These schools in many countries of the world are major revenue-making enterprises; they cater to the elite classes and charge steep tuition.  A thesis concluding these schools are exceptionally effective can function as a potent form of advertisement and therefore has monetary value, the more so when it comes from a reputable US university.

Other members of Aydin's thesis committee have connections either to Coral Academy of Science or to the Gulen Movement.

Aydin's principal advisor was a founder and board member of the Rainshadow Community Charter High School, located in the same Nevada county (Washoe) as Coral.  There have been close connections between the Rainshadow school and Coral Academy.  One individual who served as human resources dean at Coral is now principal at Rainshadow; he was also one of the defendants in a federal lawsuit against Coral Academy.  Another was administrative assistant at Coral for 4 years and then administrative assistant at Rainshadow.  Minutes of the Rainshadow board meetings from July 2008 show that 3 new board members arrived from Coral Academy for the following reason: "They are all licensed teachers who teach at Coral Academy of Science. These three members will bring Rainshadow back into compliance on the issue of at least three licensed teachers must be on the board."  The fact that teachers from Coral helped Rainshadow suggests that Rainshadow board members, including Aydin's thesis advisor, may possibly have felt indebted to Coral and thus to Murat Yuksel.

Another of Aydin’s committee members attended the 5th Annual Dialog and Friendship Dinner of the Sierra Foundation in 2008, and indeed gave closing remarks.  The Sierra Foundation is the main Gulenist “Dialog” organization in Nevada.  This member also attended the Gulen Conference in Chicago in 2010, co-presenting a paper with Aydin on Aydin's thesis topic; a video of their presentation can be viewed at the Vimeo page of the Niagara Foundation.  (In the introduction it is mentioned that Hasan Aydin taught English in Mongolia; this was at the Mongolian-Turkish Gulen schools in that country.)

These non-Gulenist members of Aydin’s committee are in all likelihood good people with good intentions, and it is emphasized that there is no desire here whatsoever to target any of them.  However, their connections to Coral Academy, the Sierra Foundation, and the Gulen Movement may have made it more difficult for them to look at Aydin’s thesis critically and objectively.


At best, a mistake; at worst, a thesis that serves a special interest group rather than scholarship

The most charitable view of Aydin's thesis is that it was simply a mistake created by the excessive zeal and enthusiasm of a couple of individuals for Gulen schools.

While it is very difficult to prove, there are reasons to believe that it was not an accident, but rather, that it was a calculated and carefully planned move on the part of the Gulen Movement.  However, it is not reasonable to expect a university to take action on such grounds without very substantial evidence.

Since there is no way to prove the underlying motivation, universities are left only with the option of improving quality control to ensure that theses do not end up serving the interests of special interest groups rather than the scholarly community.

One helpful step might be to mandate one or two extramural, independent reviewers for every thesis.  Another approach would be to require that all students and committee members sign a disclosure form listing conflicts of interest, which would then be reviewed by an independent board.

It is also hoped that this page, by informing the public, will play a small role in helping to curb the abuse of our public education system by special interests.