Is the Turquoise Council the paid lobbying firm
of Azerbaijan's government?

In late May 2013, a large-scale lobbying event took place in Baku, the capital of Azerbaijan, organized by various member organizations of the Gulen-affiliated Turkic American Alliance.  The event was billed as the "US-Azerbaijan Convention: Vision for Future;" the website is http://usazconvention.org/.

A June 26, 2013 article by Larry Luxner in The Washington Diplomat provides the most insightful description of this event, which was also mentioned in a few local news stories in various states focusing on regional public official who were attendees.  Luxner says his news agency was the only US media outlet that actually attended the event, which, he reports, "was among the biggest concentrations of American political star power ever seen in the Caucasus — 317 delegates from 42 states, including 11 sitting members of Congress and 75 state representatives, not to mention the former governors of New Mexico and Oklahoma as well as three ex-Obama White House insiders: political strategist David Plouffe, former press secretary Robert Gibbs and ex-deputy chief of staff Jim Messina."

No complete list of the 317 US attendees appears to be available.  So far, it is known that the following public officials participated:
Former government officials present included:

Phil Williams of Nashville NewsChannel 5 reported that the following public officials from Tennessee were traveling to Azerbaijan in late May and then on to Turkey.  Williams wrote: "The invitations came from a group called the Turkish American Chamber of Commerce of the Southeast -- with the money coming from a sister group called the Turquoise Council of Americans and Eurasians."  While nowhere in Williams' article was the Baku convention mentioned, a reasonable assumption is that the late-May stopover in Azerbaijan was to allow these Tennessee officials to attend the event.
The names of the remaining public officials among the 317 US delegates are as yet unknown.
What they got (apart from the trip)

The Washington Diplomat quoted organizer Kemal Oksuz as stating that "95 percent of [the attendees] received honorariums of $2,500 each. The remaining 5 percent — including Plouffe, Gibbs and Messina — were paid no more than $10,000 or $15,000."  Luxner's article then goes on to mention that each participant received "pricey gifts" "including a hand-woven Azeri carpet, an executive briefcase and a set of Czech-made tea glasses."
The Gulen Connection

Kemal Oksuz (a.k.a. "Kevin" Oksuz), the man who organized the convention, is a major player in the US Gulen Movement.  He is a former Executive Director of the Niagara Foundation, which has Fethullah Gulen as its honorary president.  As "Kevin" Oksuz, he was involved in applying for building permits for a complex at 501 Midway Dr in Mt Prospect, Illinois which now houses the Science Academy of Chicago, and is an address that has also been used by the Turkish American Federation of the Midwest, the Turkish American Society of Chicago, Niagara Educational Services, and United Strong Construction.  The latter firm was owed $72,000 by Concept Schools, according to its 2006 IRS Form 990.  Concept Schools manages 27 Gulen charter schools in the Midwest.  Memphis mayor Myron Lowery met "Turkish representatives" Kemal (a.k.a. Mark) Namver and Kemal Oksuz in 2009; Namver has ties to several Texas Gulen charter schools.  Other positions on Oksuz's resume include Executive Director of the Institute of Interfaith Dialog, CEO of the Gulen Institute, and Vice President of the PTO of Harmony School of Innovation, a Gulen charter school in Houston.  Oksuz is currently director of the Turquoise Council of Americans and Eurasians and he also represents the Assembly of the Friends of Azerbaijan.  Kemal Oksuz's company TDM (Target Design Management) was the subject of a June 6, 2011 New York Times article on insider deals at Gulen charter schools in Texas.  Oksuz managed to give $13,500 in political contributions in 2012 alone.  In Jan 2011, Oksuz was interviewed along with another high-profile Gulen follower, Yuksel Alp Aslandogan, in a PBS piece on the Gulen Movement.  In July 2011, Today's Zaman, known to be a media outlet of the Gulen Movement, ran a piece on the Turkey trips organized by Oksuz.

Organizations mentioned in news articles on the Baku convention include the Turkish American Chamber of Commerce of the Southeast and the Rumi Forum, which are said to have sent out invitations, and the Turquoise Council of Americans and Eurasians, which organized and, according to some sources, funded the conference.  All three organizations are also members of the Turkic American Alliance.

Conflicting information on who paid the $1.5 million bill

Even though The Washington Diplomat article never mentions Fethullah Gulen, it states that Kemal Oksuz's "advocacy group" was the "main driver" behind the event, leaving no doubt as to the central role of the Gulen Movement.

Luxner further writes: "Oksuz estimated that the five-day extravaganza cost roughly $1.5 million."  (Side note: if indeed the event were five days long, it is unclear why the conference website gives the dates as May 28-29, 2013.)

Where did the $1.5 million come from?  The conference website shows the "organizers" as the Turquoise Council for Americans and Eurasians and the Assembly of the Friends of Azerbaijan.  Listed "sponsors" are SOCAR (the State Oil Company of the Azerbaijan Republic), Practical Solutions Group, British Petroleum, Caspian Drilling Company, McDermott, Kellogg Brown & Root,  M-I Swaco, Conoco-Phillips, Chevron, and Azeri M-I Drilling Fluids Ltd.  It cannot be assumed with certainty that all these corporations provided funds, since the Gulen Movement is notorious for stretching the meaning of the word "sponsor" as it seeks to legitimize itself by putting the names or logos of as many respectable organizations as possible on its websites.

According to Roll Call, the Turquoise Council paid for the congressmen who attended.

More significantly, the post-travel disclosure forms for at least two Congressmen, Ted Poe and Jim Bridenstine, state that the Turquoise Council of Americans and Eurasians was paying for the trips, and "the primary trip sponsor has not accepted from any other source funds intended directly or indirectly to finance any aspect of the trip."  The disclosure form says "Willful or knowing misrepresentations on this form may be subject to criminal prosecution pursuant to 18 U.S.C. § 1001." 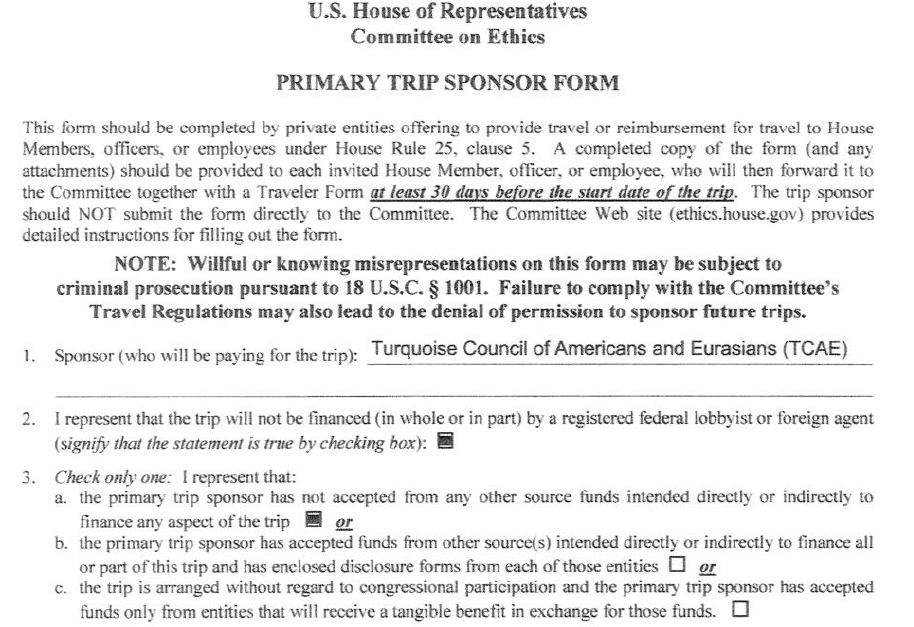 And here is a similar excerpt from Congressman Jim Bridenstine's post-travel disclosure form: 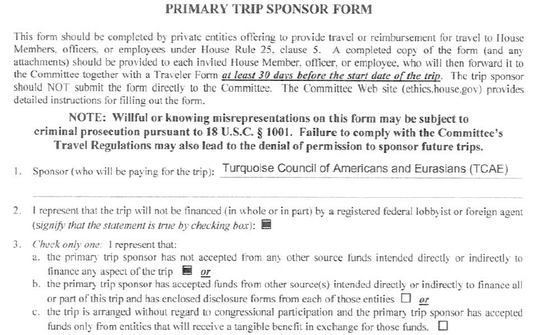 Kemal Oksuz also signed off on these forms, certifying that he is "not a registered federal lobbyist or foreign agent for any sponsor of this trip." 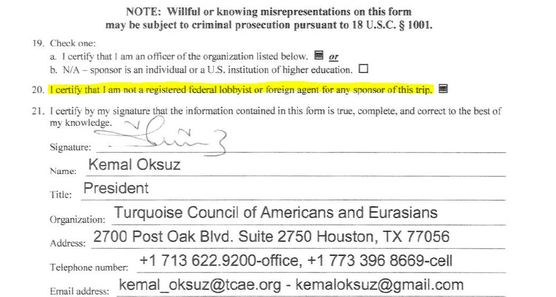 More significantly, in an interview with the Azeri news outlet "Turan" published on their "Contact" website, Michael Rubin revealed that "SOCAR was the main sponsor and several Azerbaijani and American companies contributed to a lesser extent. The Turquoise Council of Americans and Eurasians did not contribute any funding to the conference. They were hired by the sponsors to organize the conference, however, and take care of the work of inviting those the conference wanted to invite, organizing their travel and hotels, and doing other logistics."

If Rubin's statement is true (he attended the conference himself, making it quite plausible that his information is accurate) then not only would the the statements on Poe's and Bridenstine's disclosure forms be false, but further, their trips might well be in violation of House ethics rules, which require for congressional trips that:
"to receive Committee approval, Members and staff must provide the Committee with written certification from the private source as to the following:

If the source of funds for Poe's and Bridenstine's trip were SOCAR, the State Oil Company of the Azerbaijan Republic, then the money would have come from the Azerbaijani government.  Azerbaijan most certainly employs lobbyists.  Thus, the house ethics requirements for approval would have been violated.

Furthermore, assuming Rubin's statement is correct, then the Turquoise Council is in fact functioning as a paid lobbying firm for the government of Azerbaijan.  It is no coincidence that a spate of state resolutions favoring Azerbaijan have followed on that nation's aggressive wooing of our congressmen and state-level public officials (putting the search words "sobering reminder" + "terrible carnage" in a browser brings up a number of recent state resolutions on Khojaly and Nagorno-Karabakh, dealing with issues of paramount concern to Azerbaijan in its ongoing conflict with Armenia).  Thus, Azerbaijan has succeeded in influencing US legislation - the definition of lobbying.  Whether or not there were any explicit discussions of such legislation at the Baku convention in 2013, or at the similar event in 2012 (which many US public officials also attended) is a moot point - when it comes time to propose or vote on legislation, politicians always remember who did them a favor.

Despite this apparent role of the Turquoise Council as a paid foreign lobbying agency, its last available IRS 990 form says "no" in response to the question "Did the organization engage in lobbying activities?"

In summary, it is deeply concerning that there is ambiguity regarding the source of funds for an event overseas attended by a large number of US public officials.  In particular, travel to this event may have been in violation of House ethics rules, if the government of Azerbaijan were in fact the footing the bill.  Finally, it is troubling that the Turquoise Council appears to be operating as a hired foreign lobbying firm while retaining tax-exempt status and denying such activities on its IRS Form 990s.
Seduced politicians often turn a blind eye to human rights, or end up misinformed

One of the most worrisome aspects of the seduction of our politicians by foreign interests is that it can lead them to ignore egregious human rights violations.  On the very eve of the Baku convention, May 27, 2013, Human Rights Watch released a report entitled "Azerbaijan: Bogus Drug Charges to Silence Critics."  The report describes how government critics and political activists were arrested on false charges and beaten.  Yet only a day or two later, Congressman Ted Poe was in Baku, describing Azerbaijan as "a free and shining light of democracy in the region" (quote excerpted from the Washington Diplomat article).  Other public officials apparently made equally disturbing comments that indicate an unawareness (or unwillingness to be aware) of the fact that Azerbaijan is ruled as a near-dictatorship and has a very poor human rights record.

It is naive to suppose that foreign governments and entities will give free trips and gifts to our public officials merely out of a noble desire to "educate" them.  They aim to promote their own interests, not to present the facts.  Tennessee State Senator Stacey Campfield bluntly told a Knoxville news outlet before his trip “I don’t know a thing about Azerbaijan.”  Unfortunately, after the trip many such state or local public officials, who generally are not briefed on international issues and for whom the Baku experience might be their only source of information on Azerbaijan, may be misinformed rather than uninformed.
SOCAR is trying to spread its message to university students as well

The Baku convention is not the only activity jointly organized by SOCAR and the Gulen Movement.  Yetkin Yildirim, an individual with numerous Gulenist affiliations, who was listed as the President of the Cosmos Foundation on its 2002 IRS Form 990 (recall that the Cosmos Foundation runs Texas'  largest network of charter schools and was the subject of this New York Times article on insider deals), is the contact person for the "Texas Global Exchange Program" at the University of Texas; its webpage states that "This exchange is coordinated through the Turquoise Council of Americans and Eurasians and the State Oil Company of the Azerbaijan Republic."  A concern is that this event is marketed to students as an educational experience when in fact it is likely to entail more pro-Azerbaijan lobbying.

Georgetown University professor Donald C.F. Daniel was very perceptive in his remarks, quoted by The Washington Diplomat: "Azerbaijanis probably got more value out of the conference than did the Americans."  That may be the best single line to sum up the Baku event, and it appears likely to apply equally well to other activities arranged by the SOCAR-Gulen Movement political lobbying nexus.