Are trade opportunities with Turkey so promising
that all our politicians must go on Gulenist propaganda Turkey trips?

A July 29, 2011 article in the Gulenist "newspaper" Today's Zaman ran the title "Senator Brubaker: US-Turkey business potential underutilized."  The subject of the article was Senator Mike Brubaker's 10-day trip to Turkey, "co-organized by Turkish Cultural Center of Pennsylvania and Red Rose Intercultural and Educational Foundation," both of which are Gulenist organizations and members of the Turkic American Alliance.  The article quotes Brubaker as saying “I am here to understand if there is a business opportunity here in Turkey and the message I am taking back home is ‘yes.’ "  Interestingly, the mission statement of the Red Rose Intercultural and Educational Foundation, as stated on its latest available IRS Form 990 from 2010, is that "The Foundation focuses on helping people understand their own culture understand others develop positive inter-group relations and build strong communities," with no mention of trade or business.  Similarly, the website of the Turkish Cultural Center Pennsylvania displays a mission statement that speaks of cross-cultural understanding and dialog, with no mention of commerce.  The website says of its Turkey trips that "The programs organized by the Turkish Cultural Center are not just touristic trips, but instead meant to be intense cultural immersions. During their stay in Turkiye, which will last between seven to ten days, guests will not only see major historic and touristic sites throughout the country, but also be exposed to the rich hospitality of domestic environments that is pervasive in all of Turkiye."  How exactly did the Senator learn about business opportunities while viewing these "major historic and touristic sites"?

The following graph shows that Turkey is far from being a major export market for Pennsylvania: 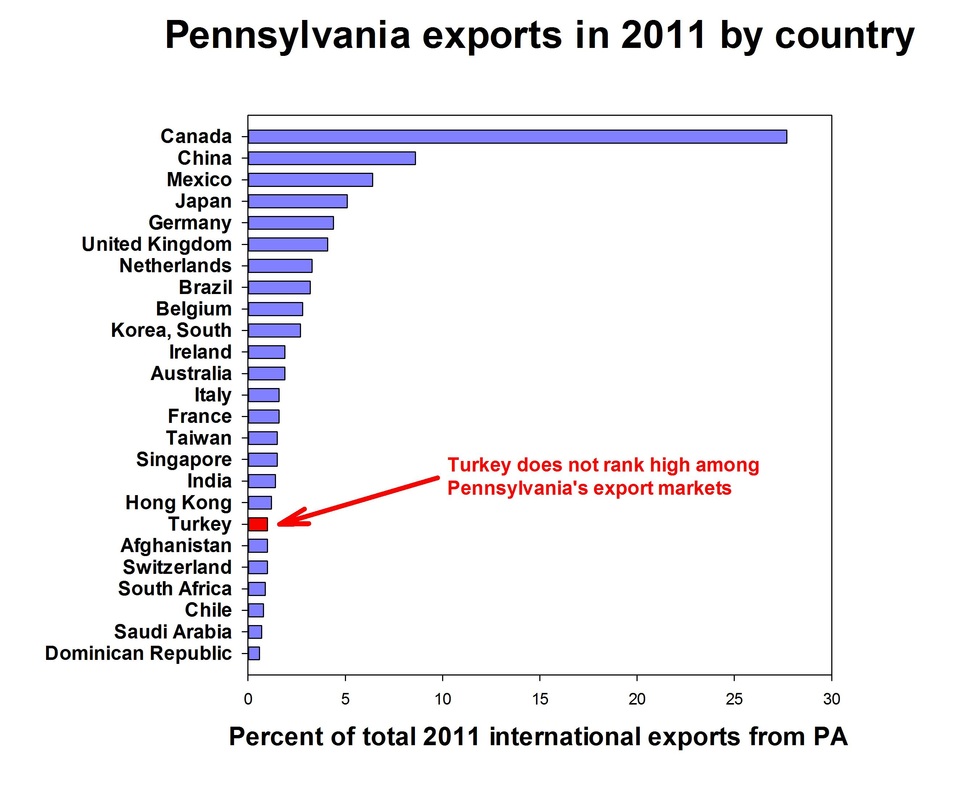 The website (accessed May 2012) of the Texas Turkish American Chamber of Commerce (TTACC), a Gulenist organization, reported on a Gulenist Turkey trip taken by Texas State Senator Rodney Ellis  "where he also visited TUSKON which [sic] partner organization of TTACC."  The article further states that TUSKON representatives "met with the Senator at TUSKON headquarters in Istanbul and discussed the business opportunities between the State of Texas and Turkey."  TUSKON is a Gulenist trade organization based in Turkey that has sponsored a number of trips of US Congressmen.

The following graph shows that Turkey is not a major export market for Texas. 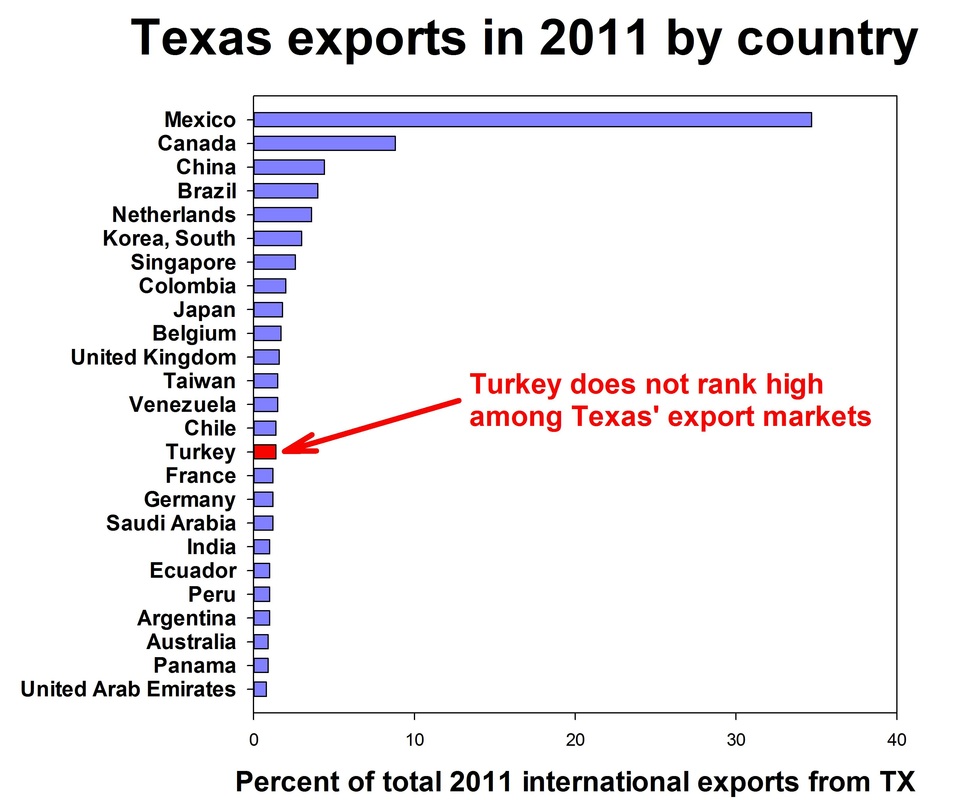 The New Orleans newspaper Times-Picayune ran a story on Jan 27, 2012 on congressional travel.  Excerpt: "Other privately funded trips by Louisiana members included an 11-day, $12,540 trip by Rep. Bill Cassidy, R-Baton Rouge, to Turkey. It was financed by the Turquoise Council of Americans and Eurasians.....Cassidy spokesman John Cummins said the Turkey trip provided his boss with important insights into a country and region of critical importance to the United States. One positive from the trip, Cummings said, is that it enabled Cassidy to hold an export-import fair in Baton Rouge to explore trade opportunities in Turkey with Louisiana businesses."

Note that the Turquoise Council is a Gulenist organization.

The following graph shows that many other countries are far more significant than Turkey for Louisiana's export market. 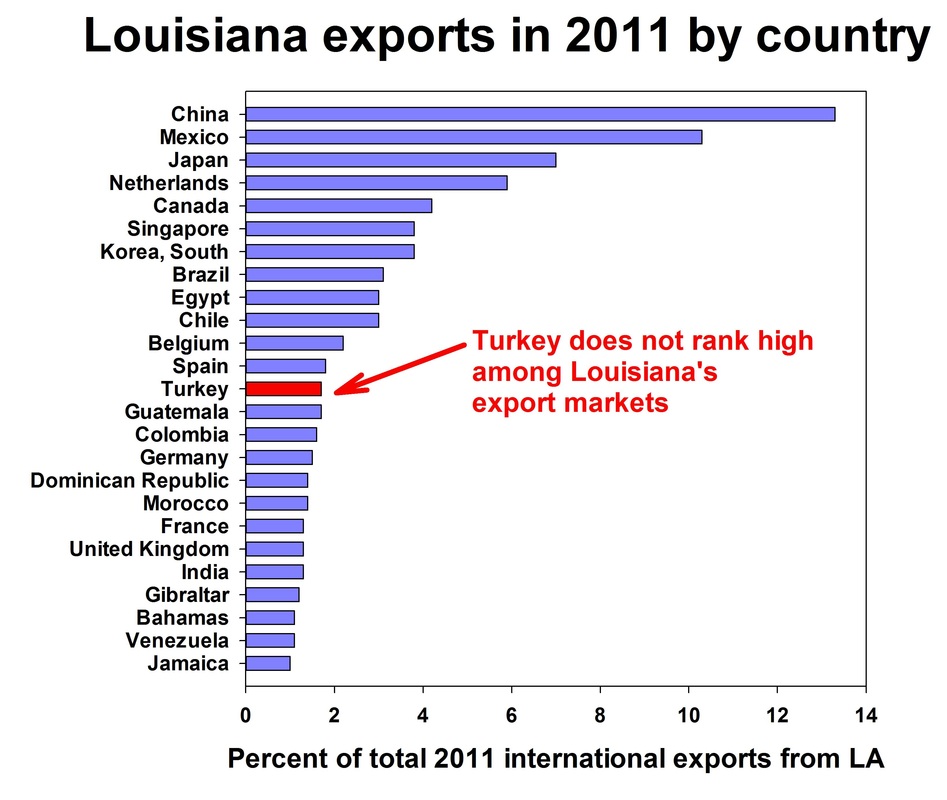 On Sep 28, 2011, the Idaho Statesman published an article entitled " Which Idaho lawmakers went on the Turkey trip, and why?"   The "why" part was never answered in the article, which mentioned 10 Idaho lawmakers participating in a trip sponsored by the Pacifica Institute, a Gulenist organization (Turkic American Alliance member).  The Statesman reported: "The lawmakers tried to nudge Turkish businesses to buy Idaho products — an understandable sentiment, since Turkey doesn’t even crack Idaho’s list of top 25 export markets."


For an (incomplete) list of politicians from these and other states who have been on Gulenist Turkey trips, click here.


WHY THESE TRIPS ARE AGAINST THE PUBLIC INTEREST

The claim by some politicians that Gulenist Turkey trips are about promoting business in their home states is difficult to lend credence to, given that a number of other countries provide significantly larger export markets.  Why aren't there a proportional number of trips to China, South Korea, India, or Brazil, for example?

While there may be legitimate reasons for politicians to visit some foreign countries, Gulenist Turkey trips are inappropriate under any conditions.  These trips offer a one-sided, propagandist viewpoint.  They are lobbying, even though the sponsoring Gulenist organizations do not admit to the IRS that they are lobbying, which is dishonest.  If a politician truly needs to learn about Turkey to better serve his constituents, let him organize his own trip, and pay for it out of his own office budget -- although only after explaining clearly to the public exactly what the trip is supposed to accomplish.  Only then can taxpayers be assured that these trips do not involve the corrupt influence of a special interest group.

THIS IS HOW LOBBYING WORKS

How many politicians heard about concerns regarding the Gulen charter schools in their home state, but, remembering fondly their wonderful time in Turkey, where the food was so good, their hosts were so incredibly hospitable and generous, and their US-based Gulenist guide was so very nice, they decided to let the matter slide?

Note: data on exports by state were from the US Census Bureau.  Here are the links: Pennsylvania, Texas, Louisiana.  For other states, change the two-letter state abbreviation in the link http://www.census.gov/foreign-trade/statistics/state/data/pa.html